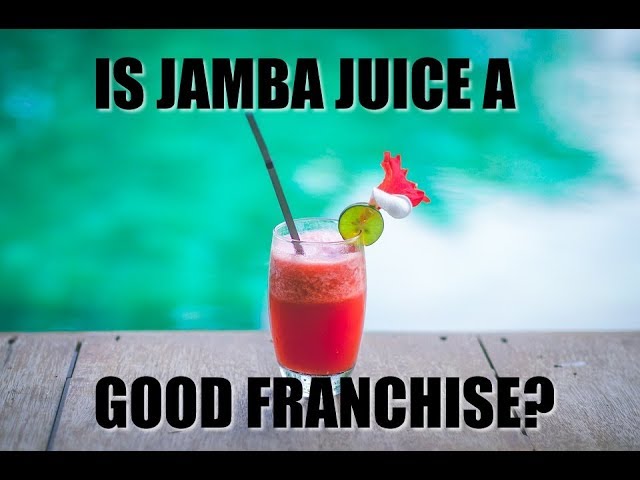 Here at Franchise City we get a lot of calls from clients asking if the Jamba Juice Franchise is a good investment. Good or bad is relative so lets take a look at the opportunity objectively.

So taken from their website it will cost you $346,100 to $619,300 for a Traditional Store. Jamba also has options for non traditional stores like Universities, Entertainment venues etc. but let’s just stick with a traditional store. They also have a kiosk option which will run you about $203 to 374k according to their 2016 FDD.

Royalties are a bit complicated and are based on how many stores you own and what type, but you’ll be paying 6% of net sales unless you sign up for 4 stores then they’ll drop you down to 5.5. Marketing program is 3-4% for a traditional store. So you are at about 10% total.

From Jambas own website Jamba indicates they are the industry leader with over 850 units Nationwide and unmatched brand recognition. They are innovative serving up juices wraps, and flatbreads. No preservatives, no trans fat, and everything tastes great. Not only that they are boasting being on the Top 50 Franchisee satisfaction awards!!! Wow – where is my checkbook? Now you combine all this positive information with some person who strolls into a Jamba Juice and it’s busy, and he sits down and loves the juice….. you now have one really bad reason for buying a franchise. And not to pick on Jamba Juice most people use that same emotional logic to buy a franchise and then complain when they lose their money.

Part of the service we bring our clients is to show them both sides of the story and prevent them from making an emotional decision. Yes, Jamba is good and tasty, well known, delicious and healthy food. But let’s take a closer look.

Firstly you may not have noticed due to your eyes tearing up with joy at the thought of owning your own Jamba Juice, but the Top 50 Franchise logo …..it’s from 2014. That means for 3 years they have not had top 50 satisfaction, unless they forgot to change the logo which is unlikely. Is it a logical question to ask Jamba what happened to reduce the satisfaction rates of their franchisees?

Their item 19 in the FDD which is financial disclosure does indicate some earnings of their stores. There is quite a big difference in earnings from west coast to east coast locations so it would appear you have a better chance to make money on the west coast. Now at first glance a buyer would look at these earnings and say wow – these earnings look pretty good – but lets put the earnings into context. If we hop over to the 2017 qsr50 and sort the top 50 quick serve restaurants by average sales per unit, Jamba Juice is actually the 5th lowest in earnings from the very bottom. If you have been watching our channel you would know how to calculate investment to sales ratio – which is a ratio based on how much you will make so we take the average sales per store and divide it by the median average investment and we get 75%. Also keep in mind your earnings will be lower on the East coast.

From a corporate perspective Jamba is a publicly traded company, way back their shares traded at about $50 a share and have since dropped as of today to just over $8. in 2015 Jamba sold almost 200 of their stores to Franchisees because investors were urging them to lower costs. YOU can read into that what you like.

So – just a few counter arguments against buying a Jamba Juice Franchise, the franchisors give you the rosy side but we’ll always give you the real deal. If you need help researching or finding a franchise give us a call our consultations are always free and don’t forget to like and subscribe.